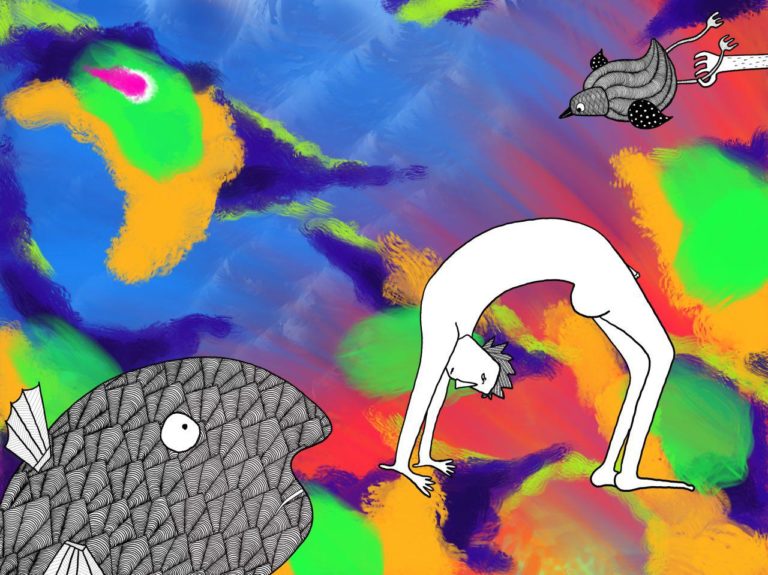 Up and Down — Digital Mixed Media Painting

I draw fish all the time. I’m not sure when it started. Maybe it was after watching the Arizona Dream where the fish glides through the air, and after listening to “This is a Film” and “In the Death Car” a crazy number of times. I had that on repeat forever.

I love this text endlessly.

Though I can’t say for sure it was the film. Or the text. Or anything in particular. There’s just some magic to the fish. To the muteness and the roundness of the eye. To the complete of the fish’s thoughts and emotions. And to the potential simplicity of the shape that is recognizable even as a doodle.

I know that I’m oversimplifying fish in the paragraph above. I guess an expert can read their feelings or motivations. But to most humans, they’ll always be a misty and glittery impenetrable entity, comfortable in a space that we ourselves can never inhabit, somewhat closer to an alien than the fluffy warm-blooded animals up above.

And birds. Birds are like dinosaurs. When I see them, I always imagine how that creature would look if it were some hundred times bigger. And what it would be like to have those walking all over the planet.

I guess I draw quite a lot of humans too. Some of the more me, others are less me and more others. I guess I find those fascinating as well. But who wouldn’t?

I finished this piece in the two days when grandpa could still talk more or less coherently. So a lot of the pattern on the fish was drawn while sitting and talking to him. Or at least trying to make out the words he was saying. And saying something that would signify understanding, reassurance, soothing and warmth. We were still hoping that adjusting his medications would stabilize his condition, ease his hallucinations and anxiety, maybe even let him sleep. There was little chance the meds would help with his heart and his breathing, but I guess we were still hopeful about that part too. He got worse the next day.

I thought the next day I’d be drawing another crocodile piece, I even started the background. But things changed, ant it ended up being a self portrait.