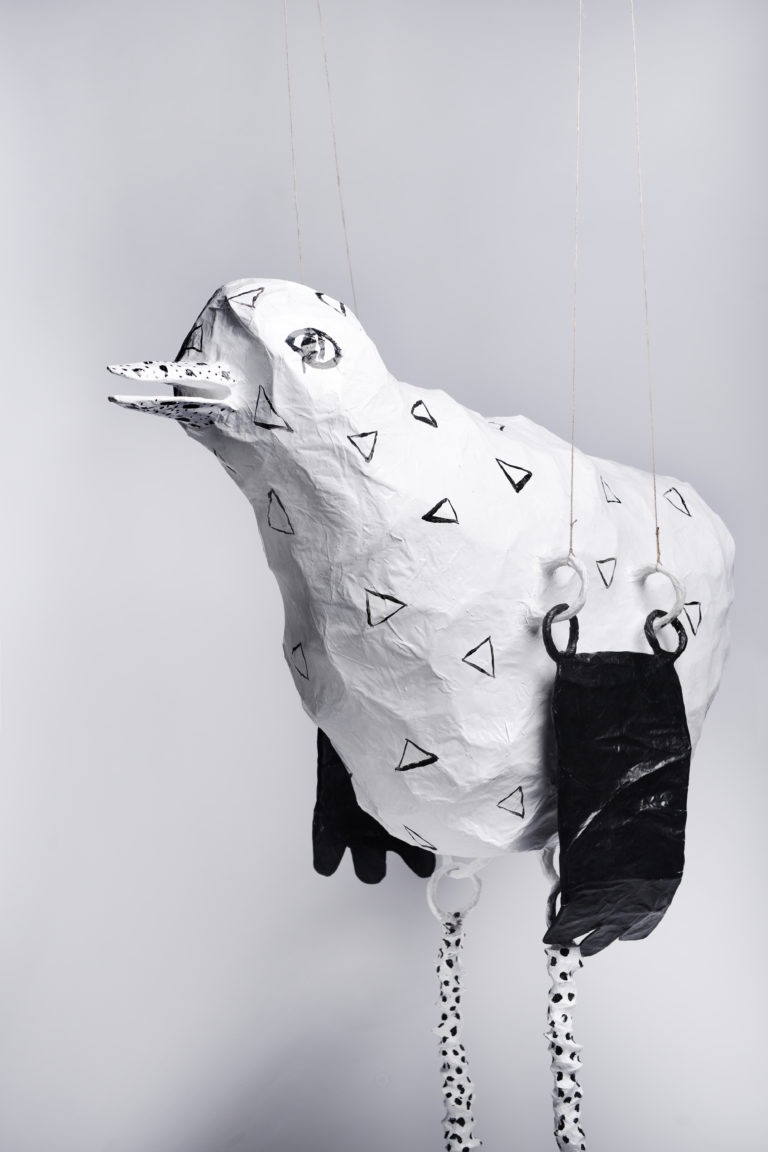 The Bird — Sculpture in Wire and Papier-mâché

(Scroll down for the story).

It was summer, and barely a few weeks after I first met the curators of Intimate Space (Интимное Место) and we had decided to do a solo show with my “Some Stories Squared, Season 1” series. I was flipping through the drawings, and they made sense. I knew they were what I wanted to share, but something was missing.

That’s when I remembered how several earlier, a week or so before Christmas, while doing my Christmas shopping, I bought several coils of steel wire. It’s called tying wire or tie wire in English (used for fastening rebar), but in Russian the name is проволока для вязания. Which can be translated either as tying wire, or as crochet/knitting wire.

Of course, I chose to think of it as knitting wire and immediately bought some with the thought of crocheting or knitting something out of it. Soon I was sitting on the floor of my apartment and twisting the wire into the form of a Christmas tree. I didn’t have a real Christmas tree that year, but my family was about to arrive for the holidays, and I couldn’t bear the thought of greeting them without one. I don’t have any pictures left, unfortunately, but it turned out quite convincing (not just a silhouette, but an actual tree, with a typical fir tree structure).

When the tree was done and I still had some wire left, I thought that it would work very nicely as a frame/base for paper-mache toys. I remembered Dala Horses, and decided to make one of my own. Then made two. Then a long and, well, wiry rabbit figure. Then covered them all in masking tape and paper mache.

The original plan was to give them as gifts to my parents, but I ran out of time, so the rabbit and both of the horses stayed with me, unfinished, and eventually I forgot about them.

Fast forward back to July 2017 and me thinking about the show missing something. I was wandering around the house, poking my nose into half forgotten drawers, walking around, the looking through more stuff and sketchbooks. And there I saw him, in a drawer of my upcycled fluorescent pink bureau I found the Rabbit. He fit perfectly: he really resembled some of the characters in the Some Stories Squared series. I made a swing for him, and he was ready to go. But he needed company.

That’s when the bird came to my mind. I knew he needed a huge bird for company. I had less than a month till the show, so I set to work immediately: bought a ridiculous amount of wire, a bucket of PVA glue, collected scrap paper from all of my friends. From then on till the day before the show it was three weeks of twisting and bending and gluing.

The paper mache had to come on in layers and took long times to dry. It was summer and hot, so I was sitting on the floor of my room naked and gluing bits of used paper to a giant bird’s body. More than half of my paper stash was a pile of old psychological evaluation tests I got from my therapist at the hospital (don’t worry they were all jumbled and mixed up and never signed, there was no chance of me glimpsing anything confidential), so the bits would have funny random facts and phrases all over them. That kept me company really well.

After spending close to two weeks all alone with my bird, working all day, I got lonely and called my friends in to help. It turned out to be a great reason to see those i hadn’t seen in a long time, and sitting and working together was delightful. And my bird became a product of friendship. That was wonderful.

When it was time to paint the Bird, it turned out that he needed to be placed upright for that, and there was no way of doing that. So I ended up hanging him up between the doors to my and my neighboors’ apartments. They would come out to smoke and contemplate the goings-on, and my old neighbor called the birdster a moon rover (луноход).

Driving him to the gallery was fun. We took a taxi, and the Bird got to ride in the back seat, while the driver and I talked about the weirdness of what people call art, me giving him an invitation to my show as we parted.

I painted the patterns on the still white body of the bird only after hanging all the other pieces. He was the center piece of the show, and he needed to rhyme with it all, and balance it all, to greet those entering, and to keep them company while they were there, in the room.

He did it well. He proved to be a very social bird.

My favorite moment was when there was a lecture at the gallery — my art, including the bird, still there. Lots of people came, and he mingled with them while they were gathering, and then watched over them during the lecture.

He was said to have also participated in a dance class, but I missed that part. I am sure he enjoyed it though. Gently swinging to music.

1 thought on “The Bird — Sculpture in Wire and Papier-mâché”