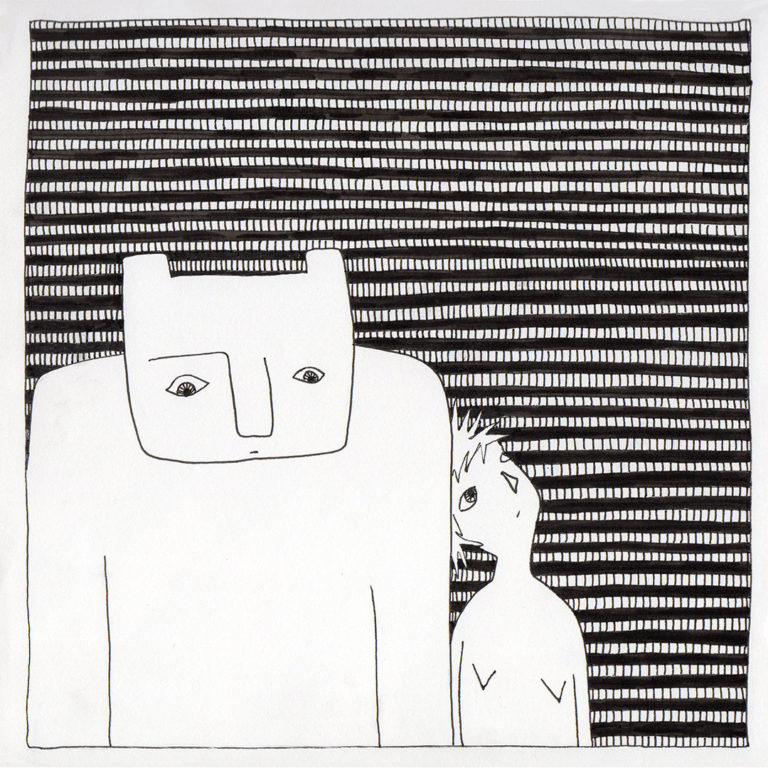 Self-portrait with Bear — Some Stories Squared

They’re standing somewhere in between side to side and back to back. The girl is looking up and away from the bear, her head slightly turned. It might be a proud and arrogant tilt of the head, but much more likely is that she’s lost in thought and either looking at something in wonder or staring off into space caught up in her thoughts.

The bear’s back is slouched, head pulled into his shoulders. He’s looking down with maybe a slight, barely noticeable tilt of his eyes toward the girl. He looks ashamed or confused or both. His features are square: square shoulders, square chin, square ears, square nose and square eyebrows.

Both the girl and the bear are naked. Most of my characters are, and if anyone, it’s the animals that usually end up wearing clothes, not the humans.

We can’t quite tell what the relationship between the two is. It may be that they have just met and are inching closer to each other, but it may be also that they’ve know each other for ages. I personally think it’s the latter, else they would not have been standing so close to each other, their arms touching, her head pressed against his shoulder.

The bear seems at a loss, and the girls’ expression is hard to catch. Is she looking away pointedly, offended? Or is there a fleeting smile on her face, and she’s just staring off into space, lost in thought?

I think the bear cares for her a great deal. I think she cares for him too. And I think it’s a very intimate moment the two are sharing, not putting on social faces. And if anything’s wrong, they’ll talk it through. Though I’m pretty sure she’ll be the first to ask what’s wrong, and she’ll probably be the one leading the conversation. She always is. The bear is bigger, but she does tend to feel that it’s upon her shoulders to be the adult in the pair. It’s a responsibility she’d love to share, but she doesn’t , and the bear doesn’t know how to approach it.

This pic is the first in my Some Stories Squared, Season 2 series. Season 1 filled up a hundred and something pages of a thick spiral a4 sketchbook with warm creamy pages. It took me about half a year to fill it with square pics (I almost never draw square pics in square sketchbooks, it feels redundant). I started Season 1 in January 2017, and in July those pics made up the core of my first solo show. It was almost a mystical feeling, taking them all out of the album and giving each one a life of its own.

After the show I missed the square pics, but I couldn’t draw them. I think that always happens to me after a show, whatever the series was I’d been working on, I can’t do it for several months at least.

Several months later, in April 2018, I got a job, the real office job kind. Within days the strangest thing happened, I could no longer draw in black and white, I had to use color. In theory, I kept loving my lines and dots, but even the thought of filling a page with them, colorless, was terrifying. I switched to markers.

I lasted four months in the job, but even when I quit and went back to working from home, my ability to draw in black and white did not return. It was only half a year later, in February 2019, that the magic happened. Someone I’d never met before, M., came by to chill and watch cartoons, which we did, and we talked half through the night.

All the sketchbooks and albums with my latest work were still at the exhibition space after my latest show, Balancing Act, so I ended up showing him some old work, including Some Stories Squared. And I just fell back in love with the series.

The very next morning, on my dogster walk, I could barely wait to get home, because I was thinking of the square lines of the bear, his massive figure taking up most of the page, and the me-girl, staring off into space, thinking.

I’m so happy to be back together with this series. Of all the work that I do, it seems to allow to tell me the most meaningful stories, to dive into what I care about most. Body, gender and intimacy. Being a woman and being alive. Patterns and surfaces. The everlasting play of background and foreground, never quite knowing which one is key. Blending in personal stories with bigger ones. Asking questions. A lot of questions.

So, why are the girl and the bear standing there? What is happening? What has just happened? Are they close? Do they like each other? What is the girl thinking about? What’s the bear thinking?

There’s a few million answers to that. What do you think?