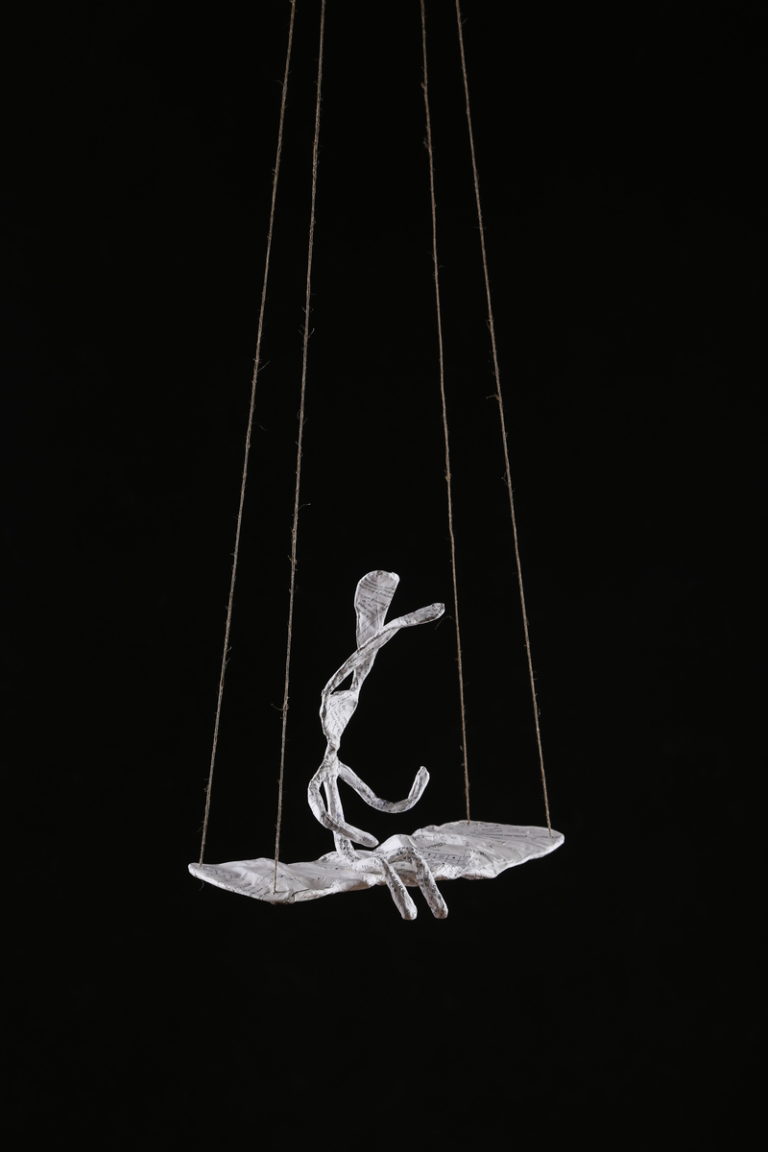 Quiet Rabbit (Rabbit on a Swing) — Sculpture in Wire, Rope and Papier-mâché

(scroll down for story)

I first discovered steel tie wire as a medium in the winter of 2014. That’s when the rabbit’s body with his solitary pensive look was born.

I liked him a lot immediately, but he was lonely and contextless, without a real place in life. He spent some time on my desk and bookshelf, but then hid into one of my bureau drawers and slept there for two whole years while I was living a life, drawing, teaching English at two different schools and trying to find my place in the art world while I was at it.

Every once in a while I would bump into him while looking for a box of charcoal, or glue, or acrylics, or yarn, or pipecleaners, or hoping to find just the right medium and idea right there in my drawer. I drew him in a lot of my Some Stories Square, Season 1 pictures. I like long-eared thoughtful skinny triangle-faced rabbits. But he never had a place of his own.

In July 2017 I was preparing for my show at Intimate Space gallery (галерея Интимное место) in St. Petersburg. While once more rummaging through my art drawer in search of ideas that would turn my show from a simple gathering of my latest graphic work into something wholesoome and meaninful, I stumbled into the Rabbit.

He was right there, waiting for me in my drawer, and he said that since he’s in so many of my graphic pieces, he would be willing to personally take part in the show, but only if I made him a swing to sit in.

Which I did, of course, because how can you refuse a rabbit a swing? That was the least I could do to make up for keeping him in a drawer so long.

So the Rabbit received a fresh coat of paper — the same scraps of general psychological assesment tests the Bird was made of, and, of course, got his swing. Swings are good for looking out into the distance and thinking.

At the show Swinging Rabbit had a great time. At night he was alone in the quiet gallery, sitting on his swing, looking at the Bird and the pictures around him (some of them showing him and his relatives). During the day people would come and push his swing.

They all did it differently. Some would push gently, giving the swing a soft back and forth, almost like tiny breaths. Others would pull the swing way back and see how high and how far it would go. Times like these the Rabbit would fall off the swing, but everyone was caring and nice, and noone ever left him down on the floor. They would always pick him up and put him back in the swing.

It’s surprising how much you can learn about a human just by the way they push your swing. Even when you’re a paper-mache rabbit.

Now Rabbit is in my temporary make-shift studio, for the meanwhile in a drawer again. But as soon as we move to a more permanent place, I’ll be able to take him out and hang him up, so he can see all the people coming and going and look at this small piece of the world from his swing. So both Rabbit and I are looking forward to sharing a real studio soon.