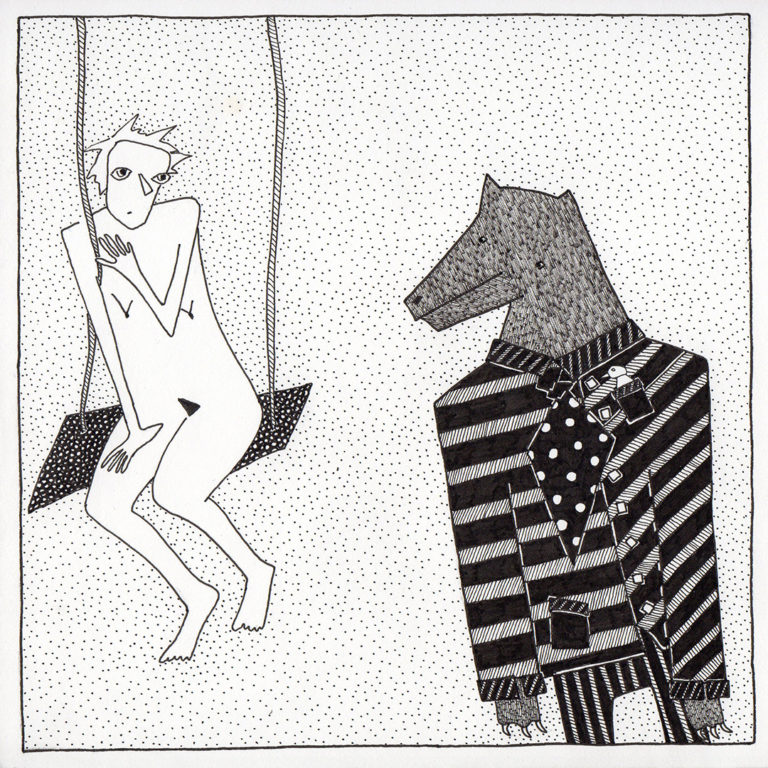 The Swing — Some Stories Squared

It all started with this bottle of wine my friend N. and I shared when I was visiting mom in Petrozavodsk.

We don’t meet often, but I’ve known N. since my seventh grade or so. We met at my hiking club that I just joined then, and just as at school but fifty-fold I was the odd one out on a million levels. N. was a few years older, respected in the club, tough, cool in all sorts of ways (including, of course, playing guitar and singing), and for some reason instead of making fun of me, she looked out for me. Even though others explicitly asked her: “Why do you hang out with that?“.

I looked up to her, she was super strong and independent, did stuff at the level of the boys or above, and was never questioned for it.

By eighth grade I learned to play guitar and sing, that remedied my social status a bit, even with all the weirdness and odd one out-ness. And got better at all the bad-ass and strong and tough stuff. Though I was physically smaller than N., and also just a million times dreamier and uncertain of any rights I had to exist in this world. So I could pretend to be tough for commercial groups of tourists I started to help out with by then, but not really fool anyone from the club.

I’m not sure why I’d write about all this here. It’s not like the pic represents that. Not in any direct way. Then again, if you’ve read a few of my texts and seen a few of my pics, you are probably not expecting me to just go ahead and explain everything. Even if it’s not the story of a very lost teenage me and a much stronger N. who gave me her friendship for some reason believing in me and caring for me, sometimes almost motherly, N. is important for this pic. And for me. And my life. And the way I turned out.

In a way, N. was the first strong woman I saw that was up close and knew personally, doing explicitly not-for girls stuff in a place where gender roles were pretty strongly defined. I loved seeing her with a chainsaw. And carrying the heaviest stuff none of the boys could sometimes even lift. Killing it on the all-boys’ team at the championship. It made me believe in myself too, and try harder.

We’re not very close now. But we always meet when I’m in Petro. And in many ways, I’m the more radical of the two of us now. But she’s still the strong and independent her I’ve always loved and respected and looked up to.

And when her friends see the postcard I gave her with the cover art for my “The Teapot, the Swing, and the Rabbit” show, they are surprised: what’s this doing here? Do you go to art shows? What’s with the weird style?

And she’s still proud of me. It’s amazing to have a friend who is proud of you.

And the pic? I think it has a lot of stories to its I think I should make a print and send it to N. I started drawing it right at her house, right after downing that wine with her, after not having seen each other for over a year. The wold from the bottle in its red coat caught me and wouldn’t let go.

What do you see?

2 thoughts on “The Swing — Some Stories Squared”