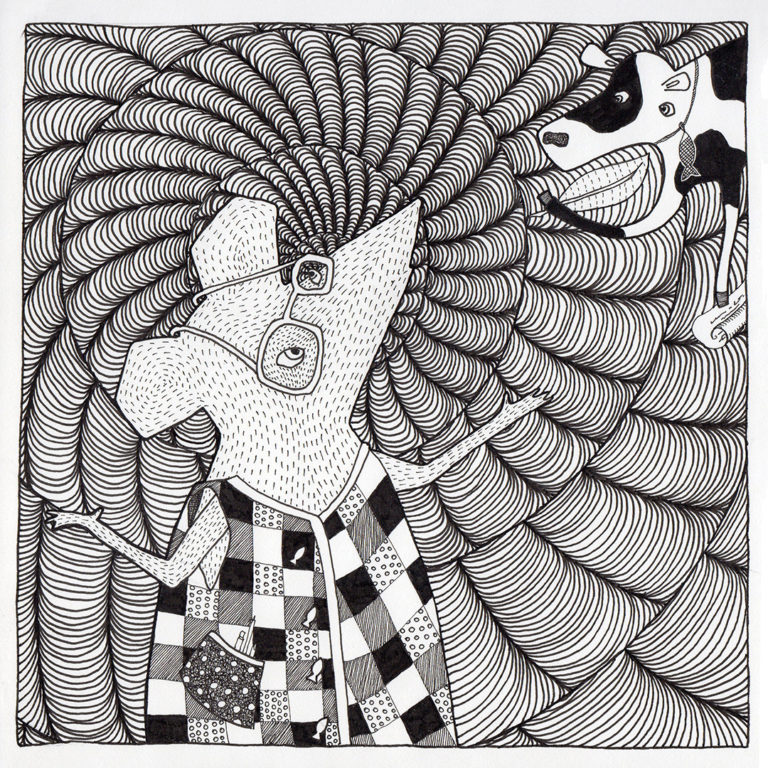 The Mouse and the Flying Cow — Some Stories Squared

Here they come, the mouse and the flying cow, caught up in conversation. I’m fairly sure it’s something deep. I tried to take a peek at the cow’s manuscript, but I couldn’t make out the words. I’m nearsighted.

It all started as the mouse tilted its head and looked up. As I was drawing the mouse’s head, J. came into the room with a confession to make. He had watched the second half of Adventure Time, Season 5, without me. I think this was the moment the mouse shrugged. What else can one say learning of such a grave treacherous act?

I really don’t think about mice all that often. My pictures are usually populated with dogs, bears, wolfs, moose, fish, rabbits, and birds of all kinds. The streets of our neighborhood are somewhat populated with humans and rats. I don’t think I have seen a mouse in the past ten or so years.

But I remember meeting one very special mouse when I was five. It was spring, and one of the jars of jam that had exploded on the balcony because of the frost earlier in the winter had finally thawed, so the floor was a sticky mess. In that mess, my mother discovered a mouse, a growing up kid by mouse standards. He was stuck in the jam and couldn’t move

My dad caught him. We washed him in a shallow bowl of water, let his fur dry off, gave him some tidbits to eat. Then we put him in a large pot, covered it with a lid. And, no, we did not cook mouse stew. I, of course, wanted to keep him then thinking that we would take great care of him, and that would make him happy. But dad said that’s not the kind of life that makes a little mouse happy. So we took the fellow outside and let him out in a place that looked more or less quiet and safe. I hope his life turned out all right.

P.S.: And in case you were wondering, J. had to promise to watch those 20 episodes again, this time together. For we have moved on 6.

P.P.S.: I’m making those two into a print, and ready to travel to their new home in Italy. I’m really that.