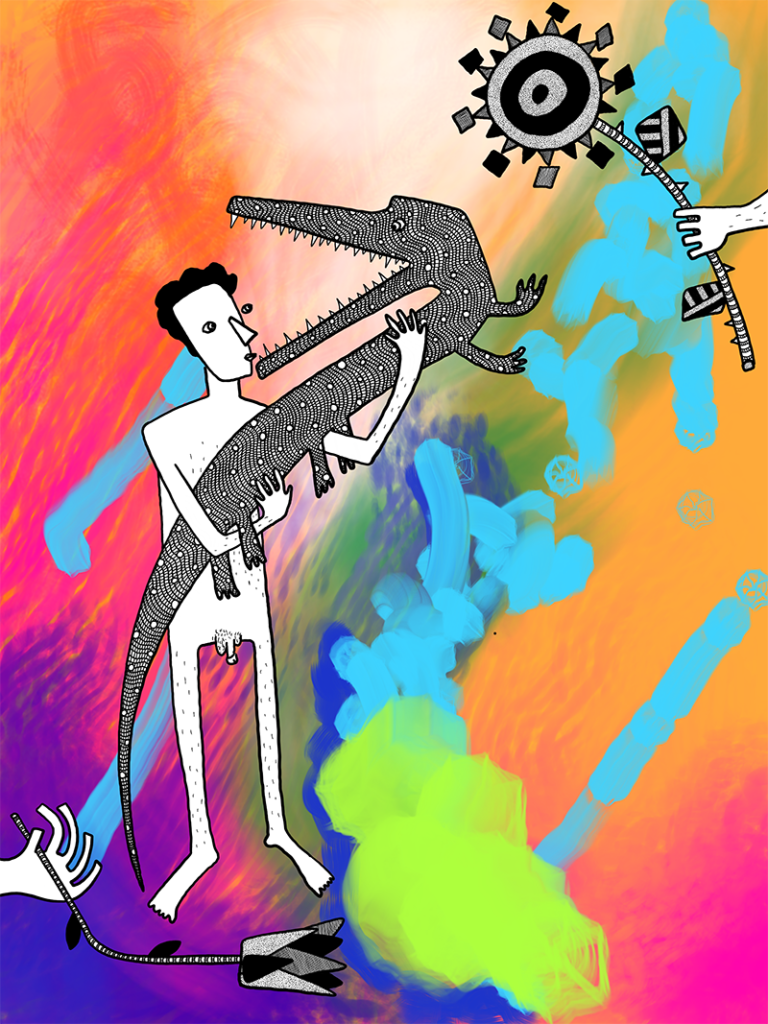 A week ago I moved back to Petrozavodsk. My grandpa is unwell, and I’m helping my mom take cure of him for the time being.

I am not sure how long I’ll be staying here, but at least until we figure out a sustainable way of caring for him. We are currently in the process of trying to find the right combination of medications to ease his anxiety, agitation and hallucinations. It’s tough for all involved.

I don’t usually do much digital work, but when I was on the train I found myself doodling on my phone just to kill the time. Lately I’ve been experimenting with a lot of mixed media in my sketchbook, and I’ve really come to love the mix of a controlled chaos kind of background, with vibrant and saturated color, done in impulsive strokes, and a foreground of detailed, controlled elements in black and white, with lots of meticulous pattern work in black liner pen against white. I love the contrast of the two, and I love finding balance between them. I guess it’s of no surprise that that was the style I found myself emulating on my phone.

My phone felt too small for drawing, and it’s pretty hard to get the kind of precision I like with your fingers on screen, but the background turned out well, and I did the outlines for the character to be. After a while of struggling with the pattern I was about to give but remembered that mom had an with an apple pencil at home. So while we were having tea with mom in the morning, I borrowed them — and they worked perfectly for my patterns. That’s how the first of those mixed media pics was born. It was a bird, as is often the case with my drawings.

I don’t have much of my art stuff here with me in Petro, so I was really glad to find out that my current favorite style works in digital, and in this I have all I need for my painting and drawing for while here. Those pictures with black and white against color are what I’d be doing on huge canvas or wooden panels if I had a studio to work on larger art in. So I thought, while I’m here in this kind of in-between space, I will try to create a series of digital pieces that I can later print out in a relatively large size, almost as if I had a studio. That’s how The Man, Croc Other Objects appeared.

Here are some pics of the process:

My favorite part about digital is that I get to use so so so much color for free. I can never run out of paint, and I can have as much of this saturated and vibrant color as I want. That’s just so wonderful, the very thought of this much color just makes me smile.

It’s also great that the process is portable. That’s really important for me right now. I’m working on these at home, but kind of on the go, a lot of the time while sitting in grandpa’s room and talking to him (or, more realistically, trying to understand what he’s saying, he has forgotten how to articulate words and it’s really hard now).

And another thing that I love about this whole ipad drawing thing is how the image glows if I draw in the dark. I’ve been talking about a show with this series in November in an underground gallery in St. Pete, and I keep thinking how awesome those would be mounted in light boxes. But I don’t think I can afford that. And it’s probably not on the eco-friendly side of things either. So I guess I’ll have to think of another way, with prints and some sort of magic lighting. But I do love the glow of the screen. You can see it in some of the process pics.

I do miss the texture you get when you layer paint. The way there’s an actual volume to it. The screen is flat no matter how many layers you use. But I like making process video (the app makes recordings while you draw if you choose it to). Oh, and I don’t have to wait for some decent daylight to take pics of my work when I want to share it. It’s already inside the digital world. That’s handier than I thought. =)

I like The Man, Croc Other Things. And I think there should be more nude men in art. I could write a whole other post about that. And there are more pieces coming, quite a few of them with nude men and with crocodiles. So stay tuned. 🙂