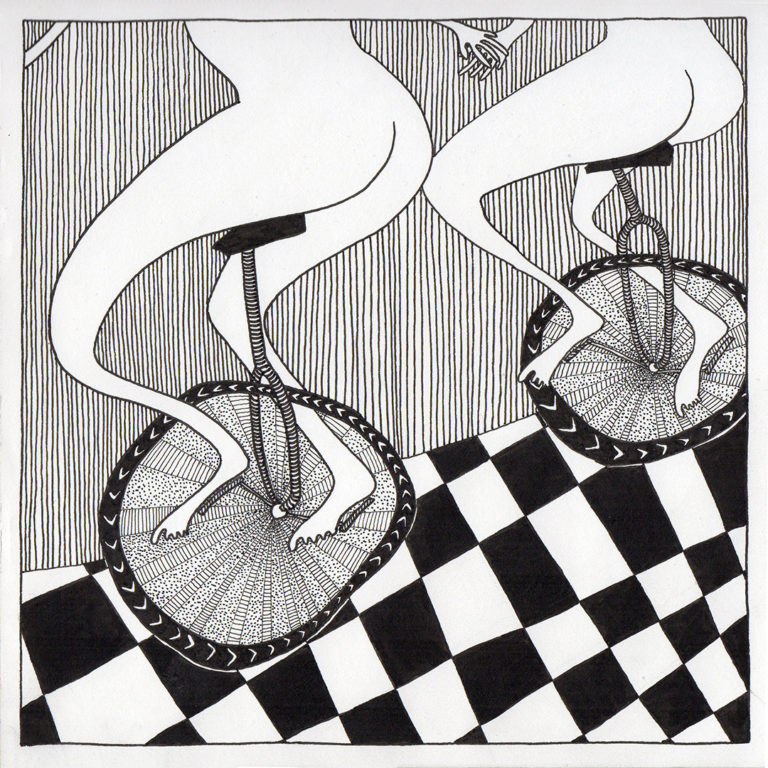 Balance and Alignment — Some Stories Squared

I really value both space and connection in a relationship. Being together, but remaining distinct individuals.

In this respect the idea of a tandem bike feels off-putting. I mean, your both pedaling, and both putting in the effort, but one of you has zero control of the direction you’re going in. Some tandem bikes even have a steering wheel on the back seat. That you can’t use for steering.

Maybe I’m being control freak-ish here. When I was little, tandem bikes seemed exciting, but I suspect that was mainly because they were something exotic and outlandish, something you could only ever see in books.

To be here, I’ve never ridden a tandem bike, so maybe I’m just imagining how not fun it would be. And trying it once could be if it’s not for a longer ride. But deep inside, I think I’d go for a unicycle any time. Or a set of unis if we’re riding together.

As I was laying down the lines and dots for this piece, I was listening to Anton Batagov’s “Selected Letters of Sergei Rachmaninoff”. I had just finished Safe Space 1 and 2, and while they captured the closeness, the intimacy connection, the context of being somewhere warm and safe with someone you trust, I felt like a part of the story was missing.  The part about personal space and preserving a sense of integrity, the part about exploration, the part about being together, but being two living people, not one conglomerate.

I love unicycles. I have tried to learn how to ride and was almost successful until I accidentally broke one of the pedals during a fall. Then a lot of life happened, so I couldn’t dedicate time to it for a while. Right now I don’t have a uni, but I hope a bit later when free time is a bit less of a legend for me, I can get one again and return to practicing. Here’s a little about how it feels.

You’d think that riding a unicycle is scary. After all, there’s just this one freaky wheel and nothing out there to support you and help with your balance.

One of the first things you discover though is that it’s really hard to have a bad fall from a unicycle. There’s a loud clutter, yes, from the uni clattering to the ground when you lose your balance, but unlike a bike it does not bring you down with it, catching your legs under the frame and all that. The uni clatters to the ground, but you, with the momentum, just keep walking or running. So at most, it’s just awkward, because you’ve just made a lot of noise, but in terms of taking a bad fall, there is really nothing to fear. And that’s so counter-intuitive. Takes you a while to get used to that and start trusting your unicycle that way.

But then there’s this other thing. The balance.

Your first instinct when you’re first starting to ride a uni is to grab on to anything you can get hold because you will crash, won’t Funny things , that never works. When you focus on finding something to lean on or hold on to, you end up leaning much one way or another, and you instantly lose your balance. The only way to really stay upright is to find that balance inside.

That sounds crazy at first, but then you start practicing. And soon enough you find out that there’s this magical point inside you. A kind of a stable core/ When you align that with the uni, you’re suddenly stable. You do have to maneuver to keep this alignment, but it’s there, right inside you, and it works better than any number of things on the outside that you try to grab for support.

And the moment when your riding and balanced and grounded feels glorious. Especially when you know that all this beautiful balance is coming from within.