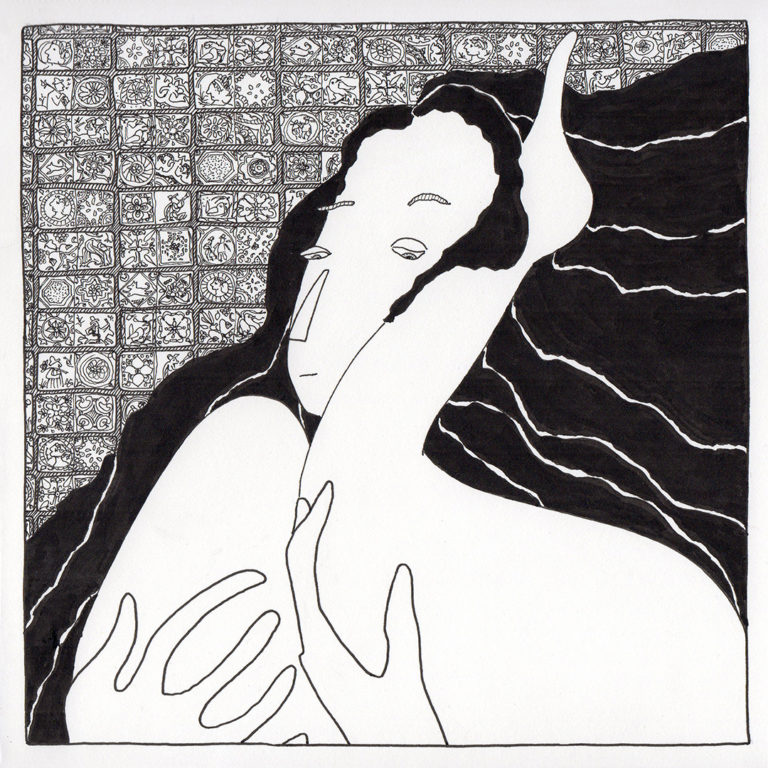 All My Tenderness, All Your Loving — Some Stories Squared

After finishing Moon, Cheese and Mustache I urgently needed to work on something personal. All my work is personal, but I needed personal personal. I could barely wait to finish the last of the circle and in the background and started this pic, with my hips and , immediately as soon as I was done. It felt good. I had through it while finishing the lines in the pattern, it was in my mind I was nearly exploding.

Long-fingered hands hugging a woman’s soft hips. J’s long hair and my rendering make it impossible to tell whether the character hugging the legs is a man or a woman. Most who look at the picture and don’t know J. assume it’s a woman — because of the flowing hair. I like that. That the hips are quite clearly female, but the main character — we don’t really know. And, of course, we assume. But it’s clearly a love story, no matter the gender. That makes me happy.

The little tiles in the background are actually individual portraits of our bathroom tiles. The shower is my safe space, a place a go to to be alone, to catch my breath, to ground myself, to collect my thoughts and to make myself feel both safe and alive again. When I’m tired or anxious or imploding with stress and fatigue, I go into the shower, I crouch on my haunches in something of a standing fetal position, I pour living hot water on my back and chest, and I look at the tiles. That always makes me feel better. It helps both when I need to focus and when I need to relax. When the story part picture was ready, I knew right away that the tiles had to play a part.

The hips are mine. J. loves my hips. For him, it’s a simple case of adoration.

For me it’s different. I grew up thinking that I was fat. I also grew up dreaming of being bony and scrawny. To be really honest, when I up I wanted my physical presence in the world to be as possible, put shortly, I wanted to dis-exist. Not to die, but my physical and bodily presence. But to keep living: reading, drawing. All the truly important things.

One day, when I was ten, my mother and I were walking to my grandparents’ place. Some paces ahead of us was an old bent over woman, walking slowly, head pressed into her shoulders. “Why is she so small?” — I asked my mom. “When people grow really old, they start growing downward instead of up” – my mom said. “I want to grow old sooner then,” — I thought to myself, — “Then I’ll start growing downward and take up less space”. I never said that out loud, of course.

My lush female body is something I never asked for. And if I could, I’d go for Tilda Swinton androgynous any time. Or at least a few years ago I would have. Now I’m not sure any longer. I guess I have gotten used to mine, and when I think of myself in a totally different shape, I think — will it still be me?

I’m bipolar, and during my hypo-manic episodes, I think my body is pretty hot and attractive. During my rare neutral episodes, I’m, well, more or less neutral. When the depressive ones come I feel having a body is close to an insult in the first place, not to mention any kind of luscious body abundant in curves and flesh.

I don’t really do a good job of loving my body. I think I’ve become reasonably fine at accepting it, but not really loving. It probably deserves way better. After all, it’s been carrying me for the past thirty years. That’s one hell of a job.

P.S.: Somehow even with all of my curves, walking around in a dress with abundant decolletage, I got mistaken for a boy several times when I had a buzz cut. Go figure. Hair really does seem to matter.

1 thought on “All My Tenderness, All Your Loving — Some Stories Squared”